The Road to Django
The Road to Django is a show presented by the Gadjo Collective that  celebrates the life of Django Reinhardt, the founder of what we know of a "gypsy jazz" and the music of the Roma. The idea is to extrapolate backwards to the origin of Romani people in India and follow the Roma trail from India to Spain and explore the music along the way. The show is tailored to fit the event, from intimate concerts to Balkan and swing dance parties, from solo performances to festivals with up to 14 musicians and 8 dancers. This show draws on a talented pool of musicians each of whom provide their unique musicality and energy to make and shape this original and exciting show.
The Road to Django Collective was put together after Cam Neufeld attended the  Django festival in Samois, France in 2010 that celebrated Django’s 100th birthday. That same year Cam traveled to India to explore the roots of Django's  music continuing through the Balkans, Spain and France studying and composing music. Since then, Cam has made two more trips to India, Turkey and the Balkans playing and researching the music of the Roma. Many of the compositions in this show were written while traveling.
Following the Roma trail from India through Persia, Turkey, the Balkans, and Spain, ending with the gypsy jazz of Django Reinhardt, this show will take you on a musical journey through exotic lands to the swing era of the Quintet of the Hotclub of France! 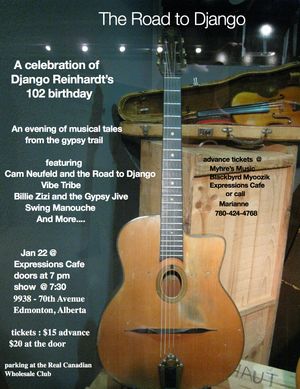